Our journey so far

The Tag Rugby Trust is a rugby based charity that was formed in 2002. It exists to help improve the lives of children in some of the poorest regions of the world. We currently work with orphanages and government schools in India, Zambia, Uganda and Kenya using the game of Tag Rugby as our vehicle. We fund our tours through volunteers who pay to join the adventure and who work closely with the children in a coaching capacity. Almost without exception our volunteers say that the tour is a life changing experience for them.

We know that we make a difference to the lives, not only of the children we coach, but also the volunteers and friends of the Trust. We are passionate rugby people and we know the power it has to break down barriers and to create life long friendships. Above all, we believe that these positive experiences should be not only for the developed world but to growing “rugby nations” who don’t currently have the resources or opportunity to introduce children to the game. We provide that opportunity. In fact, taking this philosophy to the places we do to is arguably the most important rugby export that we can think of. Our values are many but in essence they revolve around these:

Our tours have been operating since 2002 so we have the evidence that we are making a big difference not only to the lives of the children we coach but also to our volunteers. Dan Buckland is a former student of London Leisure College who joined his first tour in 2006 to Zambia. Working with the children so affected him that he couldn’t wait to return a year later on the TRT Personal Development Programme. This meant that Dan was now managing two first time tourists from LLC as well as groups that numbered 60 children in each. Dan was impressed by how much the Zambians had developed the concept themselves in the space of 12 months, proving that our model works. The trip also helped Dan to set personal goals for his own fitness and coaching levels and he has since been employed by the RFU-not a bad by product of a volunteering opportunity. Dan has more recently joined Tours to Uganda and again to Zambia to further his development. 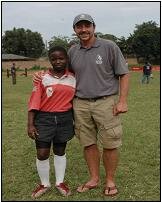 Regina Athieno was first introduced to the wonderful game in 2005 when TRT toured to Kampala and her natural speed and talent suddenly found an outlet. On leaving primary school her teacher encouraged her to join the leading rugby club, the Black Panthers, where she has flourished. Rugby has given her some wonderful moments like “the day I rounded Charlotte Mudoola, who plays for Uganda, and scored a try”, but it has also given her the confidence to dare to dream that she can become a lawyer when she leaves school. We won’t bet against her.

TRT has returned many times to the countries and schools we originally engaged with because leaving a legacy and sustaining our work is pivotal to our mission. We are delighted that we have been able to open a dedicated office with two full time staff in Uganda. They manage a pool of part time volunteers and have already developed, planned and run tag rugby festivals without the input of the UK team. The more we can invest in teams like theirs the greater the impact of our work. At the same time the work of TRT has directly led to the formation of two new rugby clubs in Uganda, Jinja Nile RUFC and Mbale RUFC. 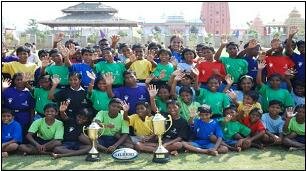 In India our first participants came from the Kalinga Institute of Social Sciences (KISS), a charitable institute for 1,000 tribal children. Such has been the take-up of tag rugby in the school and surrounding areas that an under 14 team from KISS was chosen to represent India in an international tournament in the UK-they won! Given that none of the players had even heard of tag rugby in 2006 this is an amazing accomplishment. We don’t take the praise for this, we simply smile at the results and reflect what a wonderful game we have brought to these youngsters.

In our short existence we have coached and developed over 10,000 kids. But what is more important is that these 10,000 kids have had their eyes opened to what is possible when people work as teams, communicate openly and break down psychological barriers.

That’s what keeps us going and we would love to have you join us on our journey.

First you should visit our web site www.trdt.co.uk

You can donate to the trust via www.justgiving.com/trdt